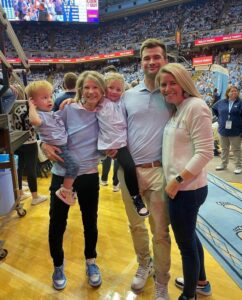 Join us in congratulating Will’s mother, Karen Shelton, on her incredible career! She has retired as the 10-time National Champion UNC Women’s Field and Hockey coach.

What an amazing legacy she is leaving behind! #goheels

North Carolina’s undefeated 2022 field hockey season will be the last for head coach Karen Shelton. After 42 seasons and an NCAA-record 10 national championships, Shelton on Wednesday met with her team to announce her pending retirement.

“I don’t have the words for what it has meant to represent the University of North Carolina for the past 42 years,” Shelton said. “The decision to retire is an extremely difficult one, but I feel like it’s the right time, on the heels of an outstanding season. I’m so grateful for this opportunity, to John Swofford, who took a chance on hiring me, to Dick Baddour and now Bubba Cunningham and Chancellor Guskiewicz and all of the other administrators and colleagues I’ve had the pleasure of working with. I’ve had amazing coaches on my staffs over the years, none better than my current assistants: Grant, Poppy and Manuel. Most of all I’m grateful to the many Tar Heels who have been part of our program as players and continue to support us. You all have represented Carolina so well, and I’m honored to have been your coach.”

A national search for the program’s next coach will begin immediately and Shelton will remain the program’s head coach until a successor is named.

Shelton is the winningest coach in the sport’s history, with a career record of 745-172-9. She also leads the way in NCAA championships (10) as well as NCAA Tournament appearances (39), victories (77) and games played (106). Her teams have recorded 40 winning seasons in her 42 years at the program’s helm.

“Karen Shelton is, quite simply, an icon of Carolina Athletics,” Director of Athletics Bubba Cunningham said. “Her legacy is more than her phenomenal 10 national championships and 745 victories – it’s about the hundreds of women who have gone on to successful lives and careers, and continued to credit her influence many years after playing for her. She has served as a mentor, teacher, champion and role model not only to her field hockey student-athletes, but also to her fellow coaches and staff members. Thank you, Karen, for 42 years of representing the Carolina family with integrity and excellence.”

The Tar Heels’ 2022 NCAA title was the team’s fourth in five years and marked the third time in the past five years that Carolina had finished the season undefeated. Shelton earned ACC Coach of the Year honors for the 12th time in her career. National staff of the year honors are still pending for this season, but Shelton has won the honor on eight previous occasions, five times as national coach of the year and three as national staff of the year, which is how the National Field Hockey Coaches Association currently designates the recognition. …” Read the official release here: Karen Shelton Announces Retirement After 42 Seasons.

Posted in Around Town